So addictive is Cathy’s meme that when I realised at tea and chocolate and beetroot brownie time on Sunday afternoon that I would be out all day on Monday I hastened into the garden with my scissors. There was so much to choose from but as the light was fading I cut a bit of this and a bit of that, plonked it all in a jug and set about photographing it on the kitchen table. In real life this jug of freshly picked flowers and foliage is quite pretty and perky, but under the flat LED light the vase looks, well, flat.

Enough excuses for my lamentable flower arranging here is what I picked:

Cornus ‘Midwinter Fire’ for its coral pink stems, Hesperantha (both coccinea and pale pink),  Japanese anemone ‘Honorine Jobert’, Acidanthera (this one stem picked from the allotment this morning and its stem sealed with boiling water in the hope it will last longer than one day in a vase),  Hakonechloa  macra ‘Aureola’, Hydrangea Heinrich Seidel, chocolate Cosmos, Rosa New Dawn, Trachelospermum jasminoides, Cotoneaster, Polystichum setiferum and Parthenocissus.

Thanks to all the rain and sunshine we have had lately there is still so much flowering in the garden including roses, clematis, honeysuckle and jasmine as well as penstemon, crocosmia, salvia, fuchsia and dianthus. Add in early  purple hellebores and flowers from Viburnum Bodnantense ‘Dawn’ and I don’t think I can remember a year quite like it. It is the same story at the allotment, produce just keeps on coming. I think we will remember the abundance of October 2015 for some time to come. 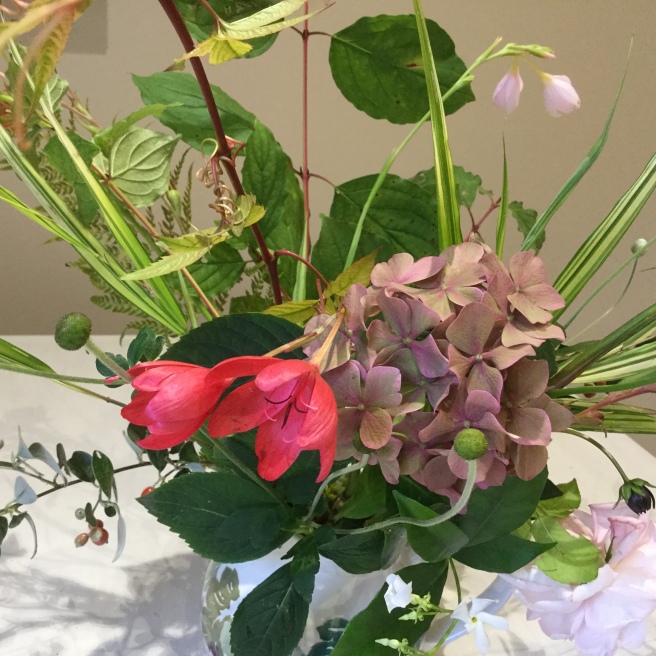 Do go over to Cathy’s blog Rambling in the garden to see what she has found to put In a vase on Monday. I’ll be joining in later today.

16 thoughts on “In a vase on Monday: Abundance”