I picked the flowers for today’s vases from the allotment on Friday evening. I left everything conditioning overnight and here below is the photo I took in very strong sunlight early on Saturday morning.

I thought I should make more of an effort this afternoon than simply filling a jug so I separated my flowers into three lots. But either the flowers weren’t cooperating or there wasn’t enough natural light on this very rainy day so the flowers in the three Denby jugs, which range in size from a quarter pint to a full pint, look flat and washed-out under the kitchen LED lights. 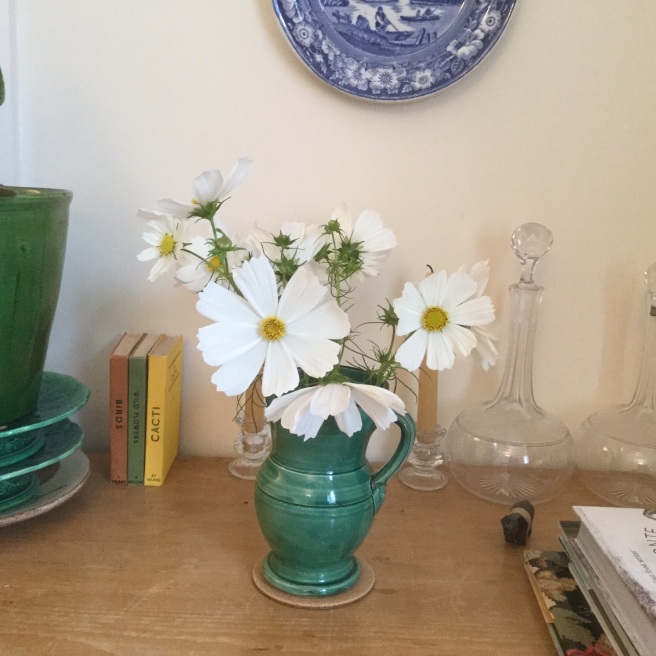 Here’s a slightly better one of  Cosmos ‘Purity’. I sowed the seed direct at the allotment in May this year.

And the half pint jug from above. Anemone coronaria ‘Sylphide’ has been fantastic, 10 corms producing at least two or three flowers a week for months. And they last in the vase for a week or more, becoming paler with age and with a more  pronounced black centre. Also in this vase is Dahlia ‘Onesta’ and dark pink cosmos.

I very nearly brought down from the top of a kitchen cupboard my entire inherited collection of Denby Manor Green, but decided I would save the pleasure of washing everything until I have enough plant material to fill my largest three pint jug.

In the meantime I am going over to Cathy’s blog, Rambling in the garden, to see what floral delights she and other bloggers have found for their Monday vases.

15 thoughts on “In a vase on Monday: Three jugs”